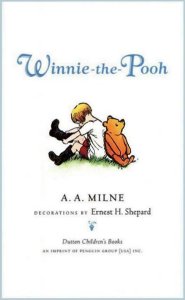 First  I have to admit I had no idea Winnie-the-Pooh was a novel. I always thought it was a kids picture book along the lines of Where the Wild Things Are or The Giving Tree. Of course I’ve seen more than one of the movies but that was ages ago. I remember stuff about a honey jar, a blustery day and I think maybe a garden but don’t know if any of that is in this book. I remember all of the characters of course. I’m hoping Tigger and Eeyore show up. Like most civilized people they were my favorites. Actually speaking of Eeyore, I know him. He’s been one of my best friends for about 15 years and is my next door neighbor. He looks a little different than in the the book but it’s him.

Overall: Well that was a fun little read. Kind of pushes the bounds on the definition of a “novel” though. I wish I had known about this ages ago so I could have read it to my kids when they were young. It is an almost perfect children’s book. For reading to kids at bedtime I rank it easily up there with all of Dr. Seuss and The Children’s Illustrated Bible.

Recommendations: Obviously I can’t recommend this highly enough to anyone with preschool age kids. But I’d also recommend it to everyone else. Read it at least once just to share a piece of heritage with the rest of humanity.

DVD: The Many Adventures of Winnie the Pooh (1977)